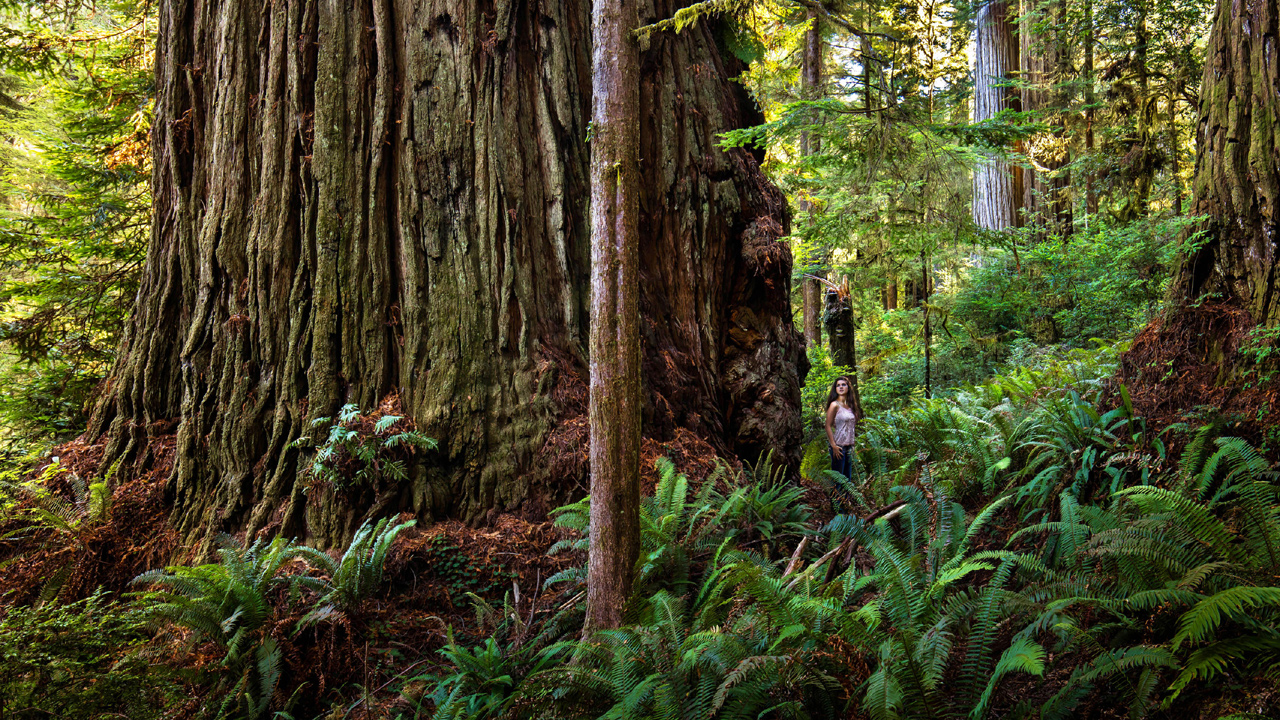 ORICK — Ten years ago, if you asked where to find old growth giant sequoia, my answer would be Yosemite or Sequoia National Park, where Sequoiadendron trees grow indigenous. But time passed, and Redwood National Park revealed hidden surprises that pushed a “reset button.”

What is a Sequoia? Going with facts, it can only be coast redwood, Sequoia sempervirens, a species known in Humboldt and Del Norte. So what merits calling Sequoiadendron a GIANT Sequoia? To deserve the title, the other mountain species would need dimensions far beyond the coast species. But that’s not the case!

Presently, the national tree champ among all species is General Sherman Sequoiadendron, listed with 1321 points, by American Forests . Tree champs are ranked with points for each foot of height, inch of circumference, and every four foot increment of canopy width.

Right now, Redwood National and State Parks has at least two coast redwoods exceeding 1321 points. Carefully adding, those two each hold over 1350 points, with dimensions to more than 29 feet wide and to over 308 feet tall. For now, the coast holds The Big Kahuna for points.

Why is Sherman listed national champ, and not these coast redwoods? There are reasons. Around 2012, a verification team released the location of a new height discovery to an Oregon news outlet. And other unique trees were damaged or burned, like The Senator cypress of Florida. In response, some discoverers do not submit trees to champion programs anymore.

“I am 100 percent certain that a coast redwood surpasses the General Sherman tree.” – Mario Vaden

Redwood National and State Parks also hides the widest diameter single trunk in the United States. It is 29.2 feet wide chest high (diameter at breast height, or DBH) and along the ground has the greatest circumference.

It was found 2010 with a friend Thomas, from Germany. Then its full diameter was measured and discovered in 2015 by another redwood explorer from Arcata. We doubt people will learn about this at park visitor centers, but Save the Redwoods League’s site noted it for several years.

But what about the Giant Forest where some large wood volume Sequoiadendron can be seen? Someone may interject that grove to defend the giant sequoia nickname.

Take the following as a kind of Certified Arborist report. When trunks of real single stem formation are compared, I am 100 percent certain that a coast redwood surpasses the General Sherman tree. Furthermore, some mountain giants that look like single trunks, are actually merged or “fused” doubles. Between new coast discoveries and observations on the mountain, that Is what I learned.

Both species are not immune to double trunk formation. Some have have seen trunks starting to merge like this where it’s easy to spot. In 1000 years, a future hiker may look at the same but think the two trunks are just one.

But trees give witness through marks, lines and shapes. They can denote what used to exist. For example, hike at Prairie Creek, then before reaching Westridge trail, a root crosses open space from a redwood trunk to the ground.

That means there was a decaying log there centuries ago. The log vanished, but the root supplies a story for future generations.

Likewise, vertical lines on trunks can indicate a redwood is actually two trees. Especially if the included bark marks are on opposing sides of what seems like one trunk. That is the case with some so-called largest Sequoiadendron trees.

This is not an anomaly. Hikers can spot this development in both regions with both species. But it becomes more obscure as each century passes.

Best I can tell, Redwood National and State Parks has a larger volume coast redwood than Sherman pertaining to genuine single trunks, with that aspect separate from the point rating for champions. So what can we conclude?

If the largest of both species were set side by side, the average person wouldn’t know which was the largest. Both species are virtually neck-to-neck for size. The coast’s biggest are randomly dispersed among thousands of acres, obscure in a Jurassic-like rainforest, while the mountain’s largest stand more open, rugged, and almost alien. Together, they are both the largest trees in the world.

But one thing seems certain. Coast redwoods exist, so large, they “vaporize” the notion that any other species deserves to be called a giant Sequoia.

Appreciate Sequoiadendron trees for their unique magnificence. And likewise appreciate Sequoia sempervirens for the inherent stature created within that forest of towers – tallest, widest and giant.

The park visitor centers know where a handful of the largest can be found. Ask for directions. Easy ones are Giant Tree in Humboldt Redwoods State Park and Big Tree up at Prairie Creek.

In Jedediah Smith park is the Boy Scout redwood near the Boy Scout Tree trail, but pay close attention to the size of trunks just feet from the trail. Also in Jedediah Smith park, take the Mill Creek trail. That trail is closed in 2020 for construction, but there are redwoods through there that can convey the magnitude of other giants most people will never be able to reach. Just give it a year.

Between the two big tree regions, the coast redwoods are hands down my favorite. I have met many new friends in relation to this forest; local folk, and others from across the United States, Germany, South Africa.

Alone and together, new finds include many new largest coast redwoods, the world’s tallest maple, tallest hemlock, and various other unique trees.

Mario Vaden is a certified arborist, photographer and redwood enthusiast based in Oregon. He has more redwood lore on his website, https://www.mdvaden.com