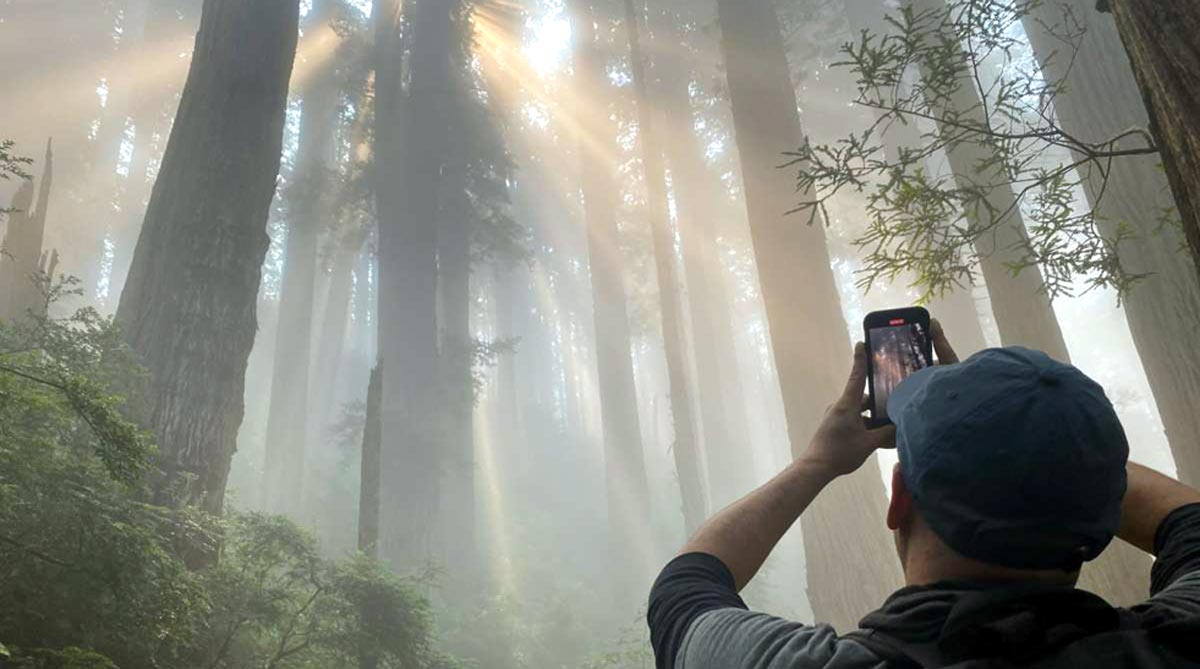 Setting off on the Damnation Creek Trail in Redwood National and State Parks, about a six-hour drive north of San Francisco, I felt giddy. This trail, I had been told, offered the best chance in all of California at seeing a dramatic natural phenomenon I’ve been chasing for nearly a year: light filtering through trees.

You may have seen some version of it before, particularly if you’ve spent a lot of time in redwood forests or maybe in Japan, where there’s even a special word to describe it: komorebi. But last year during fire season, I saw light through trees in a more dramatic way than I ever imagined was possible.

I had been driving through Redwood National Park on Bald Hills Road and there was smoke in the air from a nearby fire. The sun was shining from overhead, and I turned a corner, and suddenly, wham! Bright, thick swaths of light were beaming down on the road for as far as I could see. It looked like a hundred alien abductions were about to take place, all at once.

Hiking was out of the question because of the poor air quality, and I certainly do not recommend that anyone venture into smoky forests. But after that day, I started wondering if it might be possible to see a light show like that again.

I had been to Stout Grove before, though apparently not at the correct time. According to www.redwoodhikes.com, to see the filtering light there, you have to go during the warmer months at about 4 p.m. That’s when “the foliage becomes backlit with rich, brilliant golds and greens, like a stained-glass window in a cathedral,” and “sunbeams slant down, often visible as they cut through the darkness, to dapple the tree trunks and ferns,” the website says.

The other option — Damnation Creek Trail — was closer to my house, and I had never tried it before. Unlike Stout Grove, this redwood jaunt takes visitors down a steep slope to the ocean. On foggy summer days, when the morning sun’s rays begin to slant down from above, I was told, the display would be at its most spectacular. There were no promises, though, because the coastal fog doesn’t always creep into the forest.

Upon arrival at the trailhead parking lot, a small pullout at mile marker 16 on Highway 101, my partner and I marveled at our luck. Just one spot left. Starting out on the trail, we sauntered past 300-foot redwoods with twisty, light gray-colored trunks (apparently they are bleached by the salt-filled air). Within a mile or so, the trail began to slope downward through a lush understory of ferns. Navigating the switchbacks, we peered through the trees hoping to catch glimpses of both the sun overhead and the fog downhill.

The forest canopy was pretty thick, which made it hard to locate the sun. And although we could see a little bit of haze down below, we worried our timing was off. It was almost noon — had the fog already burned off? Eventually we came to a bend in the trail, where a woman had set up a tripod. Her lens was directed at the sky behind us. We turned around and sure enough, there was the light.

It was shooting through the canopy in a circular pattern resembling an exploding firework, with the glowing rays illuminated by fog in every direction. A rainbow corona was just barely visible within an inner circle, and we gasped in amazement. The woman with the tripod seemed equally impressed.

“God is talking,” she said, and after a pause added, “whoever she is.”

The woman turned out to be Kay Walsh, a landscape photographer and teacher who traveled all the way from Bainbridge Island, near Seattle, just to capture this phenomenon. She had been to the spot 10 years before, she said, and since then had never seen light filter through trees quite as dramatically as it does here.

Walsh also teaches photography, and makes a point of telling her students, “You’ve got to paint with the light.” At a time when technology occupies so much of our attention, she said, she finds purpose in getting people to appreciate the world’s wild places and parks and to reconnect with the land.

“They’ve lost [that connection],” she said. “So if you can touch their emotions … well, that’s why I’m doing this.”

We encountered two other photographers on the trail that day — Nate Berg and Mitch Crispe. The recently married couple live in Arcata and like me, they had also become obsessed with finding a reliable place to see light filtering through trees.

Crispe, a personal trainer, first had the experience in the Arcata Community Forest last September. “Everything lined up that day,” he said. “There needs to be fog, but then there needs to be blue sky above the fog and then the sun needs to come up at such an angle that as the fog is kind of burning off and the sun rays can be seen coming through it and through the trees.”

The couple saw it in that forest a couple of times, but it wasn’t reliable, Crispe said. Then they saw it in Humboldt Redwoods State Park, but that was due to smoke. Eventually, they met another local photographer who mentioned Damnation Creek Trail. The first time they made the hour-long trip north, the conditions were absolutely perfect.

“We couldn’t believe it,” Crispe said. “The rays were just everywhere. It’s a very surreal experience, so we decided to try it again.”
They ended up coming back six times this summer. Each time, they returned home with stunning photos of the light bursting through the forest.

Berg is a wildlife biologist whose 88-year-old mother, an oil painter, taught him about the importance of composition in art. On this trail, he said, all of the elements align for perfect composition: ancient redwoods, Sitka spruce and Douglas firs on a mountain sloping towards the sea, a constant flow of coastal fog, and the easterly, angled rays of the morning sun.

“My mother is too old to visit this place now, but I love sharing the photos I take here with her,” he said.

As my partner and I hiked farther down the trail, we expected the fog to dissipate and for the light show to end. Instead, it only became more intense. Snapping photo after photo with my iPhone camera, I tried to capture how incredible it was.